The Official Opening Ceremony of the Academic Year concluded with his speech, in which he thanked "all the work done" by the Universidad Católica during these 25 years, encouraging it to "move forward, sowing hope".

Speech by Pope Francis during the Official Opening Ceremony of the Academic Year .

“I wish to cordially greet you and congratulate you on this 25th anniversary; I thank you for all the work you have done in the field of teaching, research and evangelisation, and for the work you have done for the poorest, the sick, those who suffer, which all shows the Christian spirit that moves you". This is what Pope Francis said during his speech (broadcast by video, recorded at the Holy See) at the Official Opening Ceremony of the UCAM academic year, held this morning, which commemorated the 25th anniversary of the founding of the Universidad Católica San Antonio de Murcia.

The Holy Father added that "in this spirit I would also like to thank you for the concern you have shown during these 25 years with regard to the study and dissemination of the Social Doctrine of the Church. You have taken great care to make it known. Thank you. His Holiness asked the University to "continue to move forward, being more and more committed to serving others; and a word of advice, do not neglect sport, which has been one of the features of the university's Christian humanism during these years. May these 25 years give you the impetus to continue sowing hope, which never disappoints. He concluded: "May God bless you, may Our Lady watch over you, and please don't forget to pray for me.

The ceremony, which was held in person (in accordance with current regulations), was attended by 200 UCAM doctors, as well as representatives from different spheres of society. The event commemorated the twenty-five-year existence of the University, which was created on 13 November 1996, with the consent of the diocesan bishop, Don Javier Azagra, and canonically erected in accordance with article 3.3. of the Apostolic Constitution Ex Corde Ecclesiae, promulgated by Pope John Paul II. 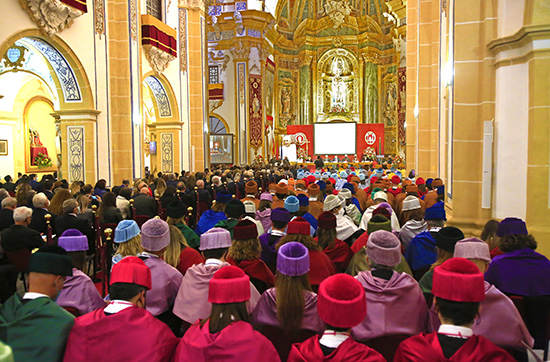 In these 25 years, the Universidad Católica de Murcia has invested 175 million euros in research, especially in the field of health; more than 50 million euros in social work, directly, as well as through the support of entities in the Region of Murcia and cooperation projects. It has also allocated 50 million euros to sports, to its own clubs, sponsored clubs and especially towards the Olympics, through its alliance with the Spanish Olympic Committee, UCAM being the university with most athletes at the Tokyo Games in the whole world, having achieved an excellent medal tally.

During the ceremony, José Luis Mendoza, President of UCAM, said that "today is a great day for us; it represents 25 years of university. We started with 660 students and today we have 23,000. We thank God because this university is providing a very important service to the Region of Murcia, as there are more than 4,000 people working in the institution, which is contributing to the economic, cultural, social and sporting development of our Region".

The President of UCAM, who has graduated nearly 100,000 students in these 25 years, recalled that "the fundamental objective of our University has always been to help and serve our students, offering them quality education and preparing them to face the challenges and difficulties that arise in life, as well as helping them to have an encounter with Jesus Christ". He also mentioned the high ranking of the institution in the most important international rankings, such as the Times Higher Education, as well as the commitment to internationalisation of the Catholic University, which "has more than 5,000 international students, with a Spanish campus in Dubai and commercial delegations in Havana and Santiago de Cuba, Hanoi, Beijing, Mumbai, Istanbul, Mexico City, Bogota, Quito and Lima".

Inaugural speech by the President of the COE (Spanish Olympic Committee)

Alejandro Blanco, President of the Spanish Olympic Committee, who gave the inaugural speech 'UCAM: our dream, our university', highlighted the importance of José Luis Mendoza "who 25 years ago began to build a dream, which is this university, nowadays a reference in the world, thanks to a person who has a heart and a mind that we would have to clone so that there would be many people like José Luis, in terms of sports, research, education and values". 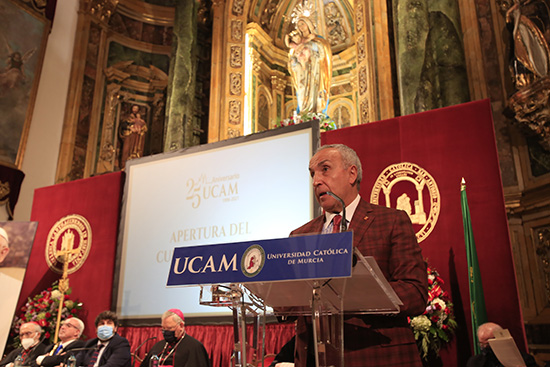 Fernando López Miras, President of the CARM, said that "first of all I would like to congratulate José Luis Mendoza and the whole UCAM family, these 25 years represent a project that has made the Region of Murcia better and therefore has also made Spain better"; a project of quality education, of success, and of an ethical and moral commitment that is remarkable and very important for me, as UCAM is one of the best ambassadors the Region of Murcia has. Murcia is known all over the world thanks to UCAM".

Josefina García Lozano, Rector of the Universidad Católica, said that "today is a day of glory, a day of celebration; our President deserves it. This institution has achieved the recognition of the entire university system", and remarked that "these 25 years have allowed us to position ourselves and be recognised in a prominent place, respected by the regulatory bodies, to which we are periodically held accountable, such as the Ministry, CRUE and ANECA".

José Manuel Lorca Planes, Bishop of the Diocese of Cartagena, recognised the work of the Universidad Católica, stressing that "these are 25 years of effort, work and doing things well". Furthermore, during his speech he praised the role of the universities as that of hope: "in their hands lies the solution to our problems and enigmas; may the result of these efforts be to live in a more humane world, and for this to be so we want an open heart, and God is within it".

Congratulations by CRUE and ANECA

Mercedes Siles, director of the National Agency for Quality Assessment and Accreditation (ANECA), assured (via video) her "recognition and appreciation", and pointed out that UCAM participated in the Pilot Accreditation Programme, being one of the first universities to adapt its study plans to the European Higher Education Area with 11 degrees. "I would like to highlight UCAM's development in terms of quality; congratulations on these 25 years of work and progress". José Carlos Gómez, president of the Conference of Rectors of Spanish Universities, also congratulated the institution "for its excellent trajectory, and for this project, which has now become a fully consolidated reality, in which you have overcome, alongside the entire Spanish university system, all the situations of change and uncertainty that have arisen in recent times".

Born at the heart of the Church

Cardinal Antonio María Rouco Varela, Archbishop Emeritus of Madrid, who presided over the Eucharist celebrated prior to the academic ceremony, stated that "UCAM was born at the heart of the Church, through its children. So that the spirit that comes from the heart of Christ may water the thought", for which he was grateful. He also affirmed that Catholic universities are born from the virtue of faith, being "light for science", and congratulated UCAM on its anniversary: "May the hearts of those who are part of in this University continue to bear fruit". 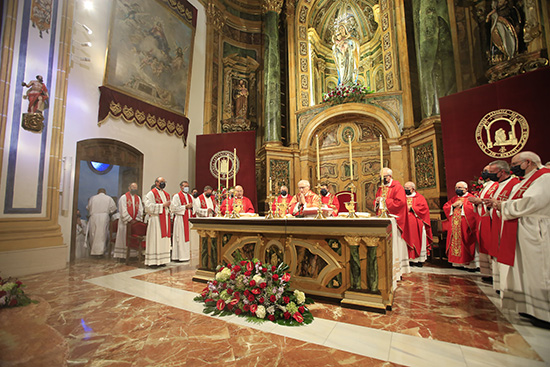